March 24, 2012
First, a quick history of RS232. What is RS232? It's just a name for a standard that has propagated from generation to generation of computers. The first computers had serial ports that used RS232, and even current computers have serial ports (or at least USB ports that act like RS232 ports). Back in the day, serial information needed to be passed from devices like printers, joysticks, scanners, etc to the computer. The simplest way to do this was to pass a series of 1s and 0s to the computer. Both the computer and the device agreed on a speed of information - 'bits per second'. A computer would pass image data to a printer at 9600 bits per second and the printer would listen for this stream of 1s and 0s expecting a new bit every 1/9600 = 104us (104 micro-seconds, 0.000104 seconds). As long as the computer output bits at the pre-determined speed, the printer could listen.
Zoom forward to today. Electronics have changed a bit. Before they were relatively high power, high voltage devices. The standard that is 'RS232' dictates that a bit ranges from -12V to +12V. Modern electronics do not operate at such high positive and negative voltages. In fact, our PIC  runs 0V to 5V. So how do we get our 5V micro to talk the RS232 +/-12V voltages? This problem has been solved by the IC manufacturers of the world. They have made an IC that is generically known as the MAX232 (very close to RS232, no?).
The MAX232 is an IC originally designed by a company called Maxim IC that converts the +/-12V signals of RS232 down to the 0/5V signals that our PIC  can understand. It also boosts the voltage of our PIC  to the needed +/-12V of the RS232 protocol so that a computer can understand our PIC  and vice versa. To get our PIC  IC sending serial characters to a computer, we have to send these serial signals through a MAX232 circuit so that the computer receives +/-12V RS232 signals. Don't worry if you're working with a chip labeled 'ICL232' or 'ST232' - these are just generics of the MAX232. Everyone says 'MAX232'. The ICs all function the same and nearly all have the same pinout. 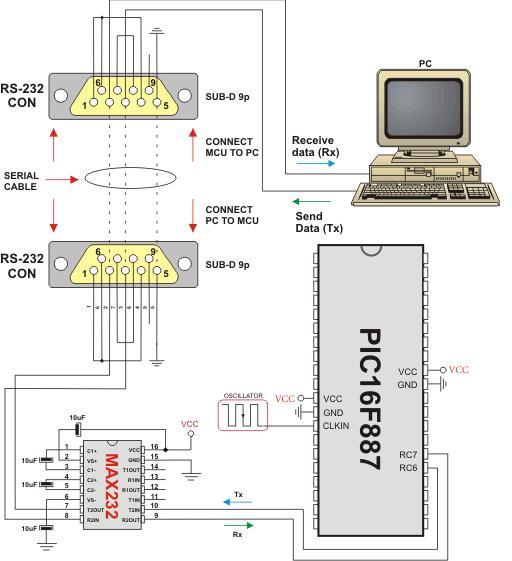 
The UART hardware module is available with a number of PIC compliant MCUs. The mikroC PRO for PIC UART Library provides comfortable work with the Asynchronous (full duplex) mode.
You can easily communicate with other devices via RS-232 protocol (for example with PC, see the figure at the end of the topic – RS-232 HW connection). You need a PIC MCU with hardware integrated UART, for example 16F887. Then, simply use the functions listed below.

This program demonstrates a simple data exchange via UART. When PIC MCU receives data, it immediately sends it back. If PIC is connected to the PC (see the figure below), you can test the example from the mikroC PRO for PIC terminal for RS-232 communication, menu choice Tools › Terminal. 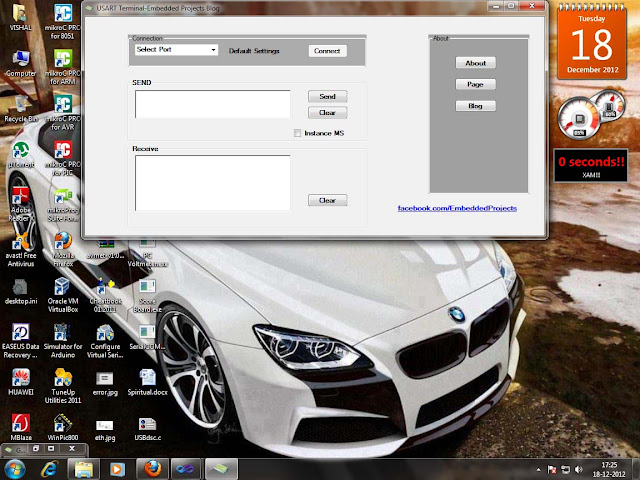 
An Extra UART For Your PIC

Popular posts from this blog

March 01, 2012
Circuit Diagram Security is a prime concern in our day-today life. Everyone wants to be as much secure as possible. An access control for doors forms a vital link in a security chain. The microcontroller based digital lock for Doors is an access control system that allows only authorized persons to access a restricted area. An electronic lock or digital lock is a device which has an electronic control assembly attached to it. They are provided with an access control system. This system allows the user to unlock the device with a password. The password is entered by making use of a keypad. The user can also set his password to ensure better protection. The major components include a Keypad, LCD and the controller PIC16F877A. This article describes the making of an electronic code lock using the 16F877A microcontroller. The system is fully controlled by the 8 bit microcontroller 16F877A which has a 8Kbytes of ROM for the program memory. The password is stored in the
134 comments
More

March 16, 2012
Circuit Electronic voting machine has now replaced the traditional mechanism of voting due to several advantages like security, automatic counting etc. This project presents a way to develop an electronic voting machine which displays the count of votes on a 16x2 LCD interface. A user can get his/her vote register through a set of switches (one for each candidate). After every cast of vote, the subsequent count can be seen on LCD. The circuit uses AT89C51 microcontroller and the code for the project has been written in C. This LCD based electronic voting machine is designed for four candidates. The input part consists of a set of six tactile switches. The switches and 16x2 LCD are interfaced to microcontroller AT89C51 for various operations and displays. The provision of casting votes for the candidates has been provided through four of these switches. These switches are made active high and connected to pins 2-5 (P1^1 – P1^4) of the controller. The remaining two
46 comments
More

January 25, 2013
This is a simple voltmeter which measures 0-5V at a precision of 4.8 mV. This is a simple design using inbuilt ADC of PIC 16F877A. PIC 16F877A have 8 channel 10bit ADC.   Measured voltage is displayed on 16x2 LCD display. Using one of the most popular 8 bit PIC 16f877A, for instance, reading the datasheet , we'll find that the ADC modules (10 bit) are controlled by four different registers. The first two, ADCON0 and ADCON1 , are used to set and start the ADC module. When high level language is used, the programmer doesn't need to care a lot of the register connected to the results because they are normally stored in a variable by a routine of the language itself ( adc_read , for instance, using mikroc). The ADCON0 As we can see this registers are 8 bit registers where. - bit6 and bit 7 are used to set the frequency of the conversions. - bits 3, 4 and 5 are used to select the pins of the microcontroller enabled to theadc conversions. - bit 2 represents the sta
6 comments
More